The Conon River system is one of the most hydrolysed systems in Scotland. With all four of the tributaries of the Conon harnessed for renewable energy generation. With 7 major dams (Glascarnoch, Vaich, Luichart, Meig, Torr Achilty, Orrin and Fannich) as well as three smaller dams.

To mitigate against the lost spawning ground across the Conon system, a fish pass at Rogie falls was installed opening the upper River Blackwater and its tributaries to salmon. Due to large areas of poor spawning habitat and a series of natural semi-passable falls, an adult salmon trap was installed approximately 3.5km upstream of the fish pass.  This facilitated the capture of the entire run of adult salmon.

To maintain the salmon run and to support the salmon population, between October and December each year, Board staff operate the adult salmon trap.  This is a large weir that spans the width of the river with a low water and high water trap. The traps are checked daily and any salmon caught are placed into broodstock holding tanks.  These fish are then held until they are “ripe” (ready for fertilisation). The hen salmon are then hand stripped and then the resulting eggs are then fertilised with multiple partners.

The fertilised salmon eggs are then transported to a flow through hatchery in Contin. These are then left to “eye” before being stocked out back into their natal river as eyed ova between February and March. These eyed ova are placed into artificial redds dug in the riverbed. This allows alevins to hatch into a natural river environment where they are immediately exposed to factors that are key to their survival. 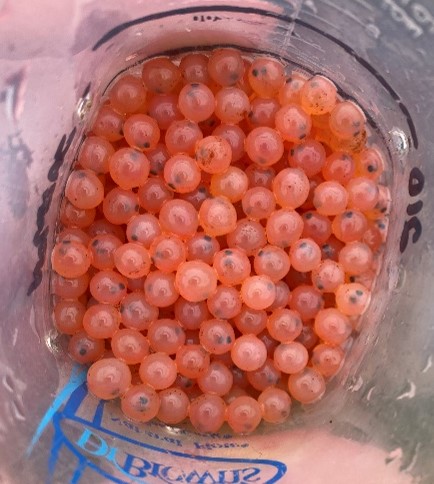 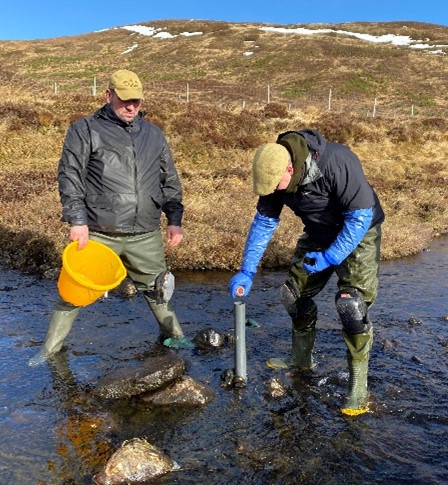 Hydro impoundments represent a significant challenge for the migration of salmon. To facilitate the upstream passage of salmon Borland fish lifts were installed during the construction of the dams.  However, the ability for smolts to migrate downstream past these dams has been a concern. In the 1990s, to improve the smolt survival, Scottish and Southern energy constructed a wolf trap on the River Bran, just before the Achanalt Barrage. This catches the entire run of smolts on their downstream migration. The Cromarty fishery board than proceed to tag a proportion (>1000) of the smolts to provide information on sea survival, transport them below the lowest dam (Torr Achility) and release them to naturally migrate to sea.

Between 2015 and 2017 the board undertook research with Glasgow University looking at smolt survival down the river Meig. The work conducted highlighted significant mortalities above what is expected for a natural loch system, with two thirds of the smolts being lost in Loch Meig with additional mortalities in Loch Achonachie downstream. It is believed the high levels of mortality are due to higher levels of predation and smolts being unable to find the exit.

To improve smolt survival and mitigate against the effects of hydro impoundments on the River Meig, the Fishery Board installed two rotary screw traps in 2019 just above Loch Meig.  These traps catch a proportion of the smolt run, these can then be transported and released below Torr Achility. In 2020 on the River Meig over 8000 smolts were safely trapped and transported. 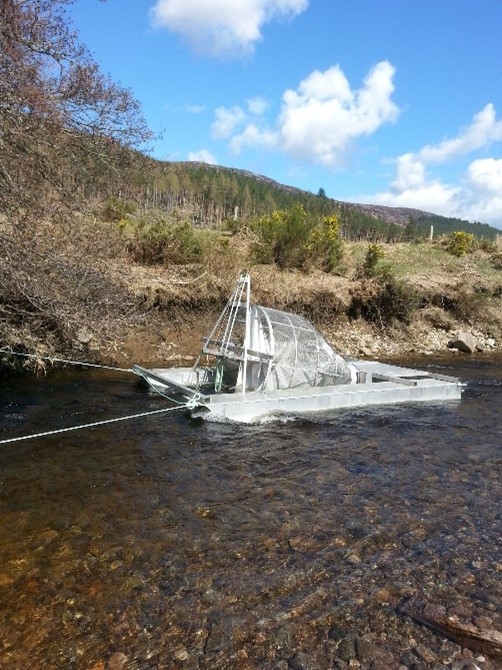 Every summer the Fishery Board conduct juvenile surveys across the catchment. This provides valuable information on the health and distribution of fish in the catchment. 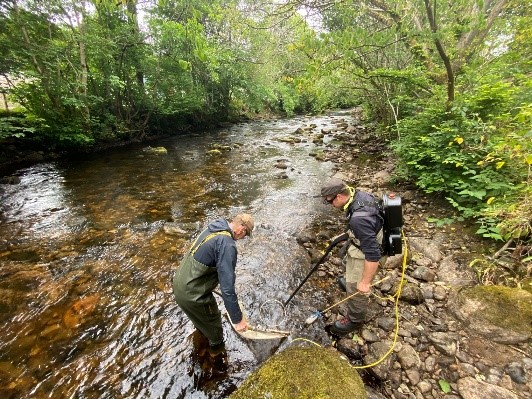 Board staff electrofishing a river channel using a backpack kit

This involves a team using electro-fishing gear. Trained staff will pass a small electrical current is through the water which attracts and temporarily stuns any fish present.  These can then be identified, counted and aged. After measuring the area surveyed, we can work out the density of the fish.

We can then compare any juvenile salmon densities obtained against a benchmark to provide an indication of the health of the river population.

This benchmark is calculated by modelling historic data from across Scotland as well as a number of environmental factors such as altitude, distance to sea, catchment size, hydrology and longitude and latitude. 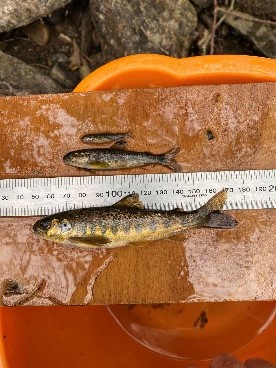 Invasive Non-Native Species (INNS) are a threat to biodiversity, wildlife, infrastructure and in some cases can affect public health. Rivers can work as transport mechanisms for spreading INNS, with seeds being transported along the currents.

The Fishery Board acknowledges the damage that these INNS can cause and have partnered with the Scottish Invasive Species Initiative (SISI) to work with volunteers and staff to manage them. For more information about the SISI project: https://www.invasivespecies.scot/

INNS currently being tackled by the fishery board:

If you would like to volunteer with the Fishery board and help tackle INNS in the area, please contact: ben.seaman@cromartyboard.com